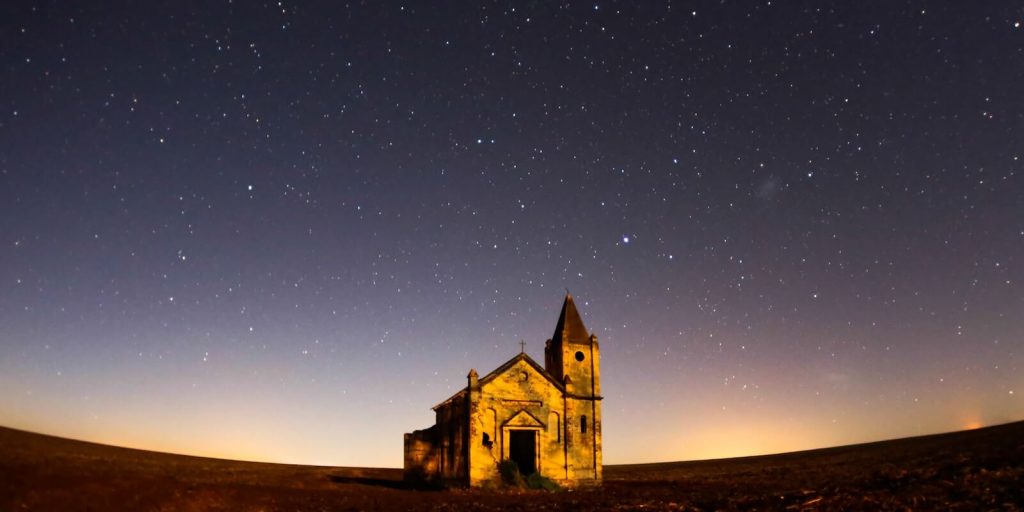 So God created man in his own image, in the image of God he created him; male and female he created them. (Genesis 1:27)

THE BIBLE VERSUS SCIENCE?

The opening words of both Genesis and Colossians make several bold claims about the world we live in: Christ is the creator of all things, He is supreme over all creation, and people are made in His image. At the same time, through a meticulous cycle of hypothesis, prediction, and experimentation, modern science has revealed a fairly detailed, consistent picture of our physical origins, specifically what our universe is and how it began.

For example, we know the universe started in a very hot dense state called the hot Big Bang, and we understand generally how galactic and stellar evolution gave rise to the basic elements that make us up (hence the mantra “we are stardust”). In addition, we have a fairly detailed picture of Earth’s geological history and the origin of species, including humans.

So how do we reconcile these facts in modern science with Biblical claims? Are scientific approaches consistent with these claims, or even legitimate? If so, why should Christians care about basic science and our physical origins? Or better yet, do Christians have a role to play in helping us understand how we came to exist from a scientific perspective?

THE MYSTERIES OF DARK MATTER

As an (almost) experimental particle physicist, I enjoy thinking about these questions and have the opportunity to explore God’s creation at the most basic level that technology currently allows. My specific research connects particle physics and cosmology, known as the cosmic frontier, and my goal is to understand a mysterious type of invisible matter called dark matter. Although dark matter makes up about 85% of the total matter, we still don’t know very much about it.

However, we at least know that it significantly impacted the evolution of the universe. For example, dark matter collided with regular matter at very high temperatures shortly after the Big Bang, and some time later, the extra mass that dark matter provided (and hence, stronger gravity) allowed galaxies to clump together. Dark matter could also be indirectly responsible for deflecting the earth-bound meteor that caused the extinction of the dinosaurs. Basically, humans would not exist without dark matter.

As a reader, you might be thinking at this point, “Dark matter seems important and cool. But if I’m not a physicist, why should I care about dark matter, or basic science generally, in the first place?” I get asked this “why” question quite a bit (not surprising since “I explore dark matter” is not a common response to someone who asks what you do for a living), and especially since I grew up in Metro-Detroit, a place where technology and manufacturing are centered on the American automobile industry. Will dark matter lead to alternative energy? Improve fuel economy? Provide more jobs? etc. Although I can defend the social benefits of funding basic science, I will primarily explore its theological implications in this article.

I would argue that exploring nature, including our origins, through science fulfills our image-bearing command given in Genesis 1. Though ill-defined and often debated in theological circles, “image bearer” most likely represents our divine purpose to reflect God’s wisdom in the whole earth and the praises of creation back to Him1. Even though the scientific method–the cycle of hypothesis and experiment–had not been invented yet during Biblical times, I do believe that image-bearing ties the claims made in Colossians and Genesis with modern science. In this scientific context, to be image bearers means to explain what creation is and how it works, in order to show the wisdom of God to the world and worship Him as our Creator. Since we are made in God’s image, we are inherently able to methodically explore God-ordained natural processes, including how we were created.

The balance of accepting both biblical claims and evidence from modern science is often difficult to maintain. On one hand, there are many devout and honest Christians who deny the truth of science, which they interpret as a threat to God’s existence. Typical objections range from Biblical inerrancy to claims that God the Creator is a sufficient physical explanation2. On the other hand, some use their knowledge of the physical world to deny the existence of their Creator. They wonder if God is needed since they assume that physical explanations sufficiently describe our existence3.

Both of these extremes ignore the reality of either the physical or spiritual worlds. They also negate our full responsibility as image bearers of God, part of which is to explore and make sense of our physical world so that we can worship our Creator. Specifically, the former extreme is afraid of understanding our origins scientifically since science may take away God’s role in creation (but as we’ve been discussing, the scientific exploration of our origins enhances our understanding of God’s role in creation since we are made in His image!). The latter extreme accepts that our universe is worth understanding from a scientific perspective but neglects the grand purpose for doing so.

There is something remarkable about the act of creating, whether it’s art, poetry, or new technology, that is deeply satisfying. As image bearers, we find a deep sense of awe and purpose in creating, or even understanding our own creation, because this is what we were born to do. And what better way to reflect God’s image than in the beautiful universe that He created? Our ability to understand the universe around us–whether it’s the nature of dark matter or the origin and fate of the dinosaurs–gives us a unique opportunity to worship our Creator by proclaiming to all the world that we are, in fact, made in the image of God.

1My understanding of the meaning of being made in the image of God has been strongly influenced by various works from both John Walton and N.T. Wright such as The Lost World of Adam and Eve (Walton) and The Day the Revolution Began (Wright).

2The theological details of these claims are beyond the scope of this post, but resources from Biologos and the American Scientific Affiliation have been a strong influence in helping me understand the compatibility of modern science and the Christian faith.

3There can be multiple valid explanations for the same phenomenon. For instance, one could ask why a pile of wood is burning at a campsite. They could reason that it’s due to chemical reactions occurring, or they could argue that it’s because someone simply wanted to roast marshmallows. The former explanation implies the “how” while the latter implies the “why.” These explanations are not only complementary, they are necessary for understanding the complete picture. One cannot exist without the other. (This is loosely based on John Polkinghorne’s boiling water example from Quarks, Chaos, and Christianity.) Matt graduated from Oakland University in Rochester, MI with a B.S. in physics and a B.S. in mechanical engineering. He is currently a PhD candidate in experimental particle physics at Stanford University working with the Heavy Photon Search collaboration, an experiment dedicated to understanding the fundamental nature of dark matter. He currently serves as the founding co-chair of the newly formed Silicon Valley Chapter of the American Scientific Affiliation which connects local Bay Area Christians in science and technology. In his spare time, he enjoys all forms of activity including soccer, baseball, skiing, and hiking mountains, as well as non-athletic activities such as traveling, eating, playing games, and reading theology.

1 thought on “Does Faith Matter When Exploring the Universe?”